In 1932, Indiana Governor Harry G. Leslie tasked Col. Richard Lieber, the first director of the Department of Conservation, with helming the Indiana Commission for the Century of Progress Exposition. Wanting to depart from the typical state fair display of threshing machines and farm produce, Lieber proposed a 250-foot mural showcasing state history.

The contract went to relative unknown Thomas Hart Benton. The muralist asked for complete artistic freedom on the job, including the composition of the overall narrative and the realistic treatment of social facts. His request was granted.

Born in Missouri, trained in Chicago and Paris, and residing in New York City, Benton was a controversial choice. Not only did he lack Hoosier roots, his style went against modern trends. Where high-brow society celebrated stately and allegorical art featuring classically draped maidens, Benton sought instead to speak to mainstream audience in a realist style.

With vocal support from the Indiana art community and the backing of Col. Lieber, Benton embarked on a six-month tour across the state with Department of Conservation staff. He completed sketches of everything from state parks and historic sites to steel mills, quarries, and coal mines.

Benton then returned to his studio in downtown Indianapolis and got to work—equipped with a pile of new brushes, a shelf of history books, and a crew of assistants.

This mural painting of Indiana sees the realization of a project that I have had in mind for 15 years.

Benton divided the murals into two parallel, chronological sequences, one focused on culture and one on industry. The narrative of both streams dramatized the changes in society and the environment, capturing the aspirations and hard work that helped Indiana transform from a wilderness to an agricultural and industrial state.

These panels feature early indigenous potters, the pioneer age, the evolution of river transportation to the railroads, and life on the farm up through the gas and steel booms in central and northwest Indiana.

Beginning with the Mound Builders, the panels follow the development of small farm communities into larger cities, the evolution of early schools into large universities, and social issues facing Indiana and the nation.

Benton made a conscious choice to include both positive and negative aspects of Indiana's history. 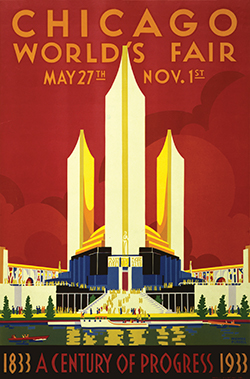 Once completed, the murals headed to Chicago. Benton was on site not only to survise their installation but also to paint a free-standing panel of the Indiana Dunes. This work has since gone missing.

On July 2, 1933, Governor Paul McNutt dedicated the mural display in Chicago. Critics were sharply divided with some believing that the murals made Indiana’s state exhibit the most artistic at the fair. Others disliked Benton’s style and subject matter, which addressed numerous social issues such as the Civil War, women's rights, labor unrest, and racial tension.

Cultural Panel 10 ("Parks, the Circus, the Klan, the Press") depicts a vivid, startling image of a Ku Klux Klan rally and a burning cross. The Klan had ruled Indiana politics during the 1920s—much to the embarrassment of progressives like Col. Lieber who preferred to bury the state's sins of the past.

Industrial Panel 9, titled "Coal, Gas, Oil, Brick," was also controversial. It pictured Socialist union leader Eugene V. Debs (from Terre Haute) rallying Indiana workers with a placard stating, "Workers, Why Vote the Rich Man’s Ticket? You've Got a Choice." The panel also features hints at the physical violence that took place during union strikes and rallies. In the midground to the right, Benton painted a crouched figure poised to throw a rock at a hired guard.

After the fair concluded, the murals were moved to the Indiana State Fairgrounds where they languished for nearly five years. In 1939, President Wells and Lieber worked together to convince then-Governor Cliff Townsend to donate the murals to the university.

On December 8, 1939, the Indiana Murals arrived on the Bloomington campus. The university placed the 16 central panels in the IU Auditorium grand lobby (now known as the Hall of Murals); four panels with "recreation" themes in IU Cinema (then the University Theatre); and two panels with "business" themes in Woodburn Hall—then the center of IU's new business school.

Benton himself oversaw the installation and retouching of the murals on the Bloomington campus.

On the Indiana Murals

"Parks, the Circus, the Klan, the Press"

Are you interested in scheduling a visit to the Bloomington campus?
Would you like more information about the Indiana Murals?